with sailing / marinecraft, those being trained

as Stewardesses, and future generations.

About the Project - undertaken by Poole Flying Boats Celebration (PFBC)

“Women in WWII successfully fulfilled many roles & duties in the workplace and home previously associated with men...”

“At Poole, the first opportunity which arose was to fill vacancies in the Flying Boats’ Marine Craft Unit (MCU) operated by BOAC. In a time of national crisis, many MCU Seamen had been called up, so a Training School for Women was organised...”

“Also there is the under-researched story of the first Stewardesses who were recruited to serve on the Flying Boats out of Poole with BOAC in WWII; unlike their counterparts in the MCU, this profession would become established in the longterm…”

This is the project undertaken by the Poole Flying Boats Celebration, called ‘AYE MA’AM’

An opportunity for local women arose in the Flying Boats Marine Craft Unit (MCU); most able-bodied Seamen were called away, recruitment of youngsters had dried up, and those retired members of the MCU that were pressed back into action were limited by the need to relocate to Poole.

There are to date only scant references in Aeronautical History and Local Studies to the story of ‘Women Seamen’ (now better remembered as ‘Seawomen’) in Poole, but we know a special Marine School was established here for their training by BOAC.

Alongside opportunities for women in the service of the Flying Boats Marine Craft Unit, was the the recruitment of women as BOAC Stewardesses.

Unlike the innovative role of Seawomen there was already a pre-war example set in the recruitment of women (as opposed to male Stewards) by Pan-Am, but that late 1930s American model had essentially been associated with the role of ‘Governess’.

Despite approaches made by PFBC to British Airways Heritage, the subject matter remains under researched and it is our determination to make a study of the first cohort of women to be recruited as Stewardesses by BOAC - for whilst it is widely recognised that the first UK Stewardesses served on Flying Boats out of Poole, the claim requires evidence!

Much the same applies at a later date for the first Stewardesses on BOAC’s landplanes at Hurn (Bournemouth Airport) - and included in the framework of this Project are the final Flying Boat Stewardesses with Aquila Airways.

The Project by PFBC will also encompass various other roles fulfilled by women at BOAC’s Marine Terminal at Poole.

Women in WWII fulfilled many roles and duties in the workplace and home that were previously undertaken by men. Specific to this Project is the operation of Flying Boats (Civil Air) based at Poole Harbour during the war and into the immediate postwar period.

According to our records no Research Project has dealt specifically with this fascinating and inspirational subject matter, and in 2012 PFBC successfully applied for Heritage Lottery Fund support to further research the few snippets of information already in our Archive, and to present the findings to the local community and other interested parties.

The AYE MA'AM Project Manager, Harry Alexander, is a Trustee of Poole Flying Boats Celebration (PFBC) and high-profile businessman within the local community.

Our Archivist, Aimée (also a PFBC Trustee) has a background in education and Applied Psychology; she is also a Social Historian; Aimée will undertake co-ordination of research and project volunteers.

PFBC is also able to call on two members, one a teacher and Trustee of the War Memorials Trust, the other a recently retired Presenter and Trainer, both of whom are liasing with schools and local colleges.

Other key Project Team members are former employees of BOAC and the Ministry of Civil Aviation, and include local historians and experts / authors in the history of aviation.

Our charity also enjoys a strong reciprocal relationship with the local branch of the Royal Aeronautic Society. 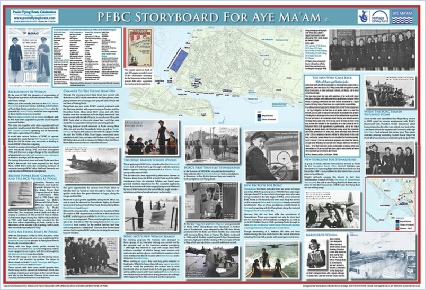 The new AYE MA’AM Storyboard (2015) - for our graphic designer Maria Burns to prepare for printing and framing, and installing at suitable sites along the shoreline of Poole Harbour.