During WWII and the immediate postwar period, within the combined populations of Poole and Bournemouth, some 650-plus families had members who were employed at BOAC’s Marine Terminal in Poole - home of Flying Boats and the various support services associated with that base (from tradesmen to those providing transport). There were also a significant number of Aircrew and their families relocated to this area; many chose to remain after the war, eventually becoming an integral part of the local community.

As men were recruited into the forces significant opportunities arose for the employment of women as BOAC staff, namely Seawomen and Stewardesses, etc., in roles which had formerly been the preserve of men.

At the same time the Military Flying Boats based at RAF Hamworthy in Poole had approximately 500 personnel stationed / billeted here (with others recruited locally). There was a similar number at the Royal Naval Air Station, Sandbanks as HMS Daedalus II of the Fleet Air Arm; again, a significant cohort then became part of the local community.

Reaching out to the community

Up to 24 of BOAC’s passenger Flying Boats were based in the Harbour throughout the war and until 1948. Its Marine Department had 60 more staff operating 12 high speed launches used to convey flight crews, passengers, mail and freight from Poole Quay and the Marine Terminal to the Flying Boats.

There was another fleet of 14 fast launches used for Water Control - operated by the Ministry of Civil Aviation and maintained by the British Power Boat Company with its Poole base in West Quay Rd. These marked out runways (see the map above), and kept them clear of all obstructions.

In identifying and recording the ‘lives and times’ of the Seawomen with BOAC’s Marine Craft Unit during WWII, and the Stewardesses who first featured on the BOAC Flying Boats operating from Poole Harbour (on flights to Foynes, Eire), links will be made with those who were directly and personally involved as well as with eye-witnesses (e.g. those working in a related capacity, or Flying Boat passengers); memories will be recalled and recorded.

Community Focus of the Project

The Project will reach out to local people through the Media, Exhibitions, Presentations and liaison with local community groups, and especially schools, to engage with families and descendants of these wartime BOAC Seawomen and Stewardesses.

The subject matter encompassed by the Project will form the basis of a new set of PFBC Storyboards (see below left) which have designated sites in the area, as well as a range of displays for indoor venues to be widely used. 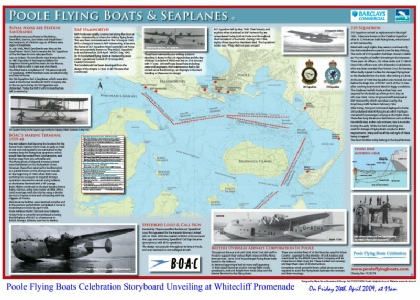 The first PFBC Storyboard (2009) can be found beside the Harbour at Whitecliff; similar boards will be created for the AYE MA'AM project and installed at designated sites

PFBC will continue to focus on special community events and gatherings, such as through Libraries, but with renewed vigour and new material aimed at a much larger audience - including those involved in areas such as Women’s Studies, and training in navigation, marine craft and sailing. There is also a great deal of scope identified to prospect establishments, tutors and students involved in training the next generation of Stewardesses, and others who aim to work in aviation.

It is envisaged that tutors and students alike will be inspired by this Project and welcome this new information. Likewise, that school children and their teachers will find this a fascinating chapter of Social and Transport History. Accordingly, PFBC intends to produce a range of literature (including teaching packs) which will be tailored to a broad age range. 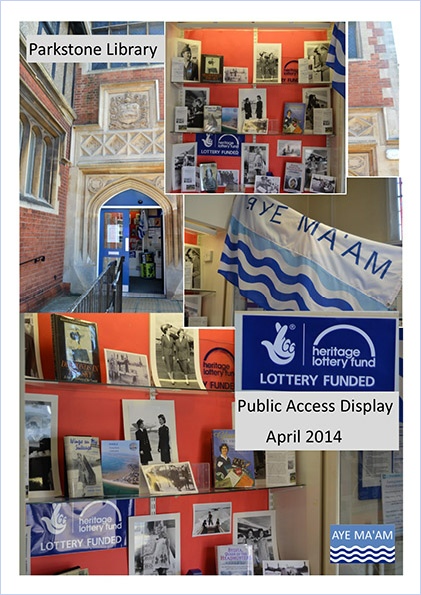 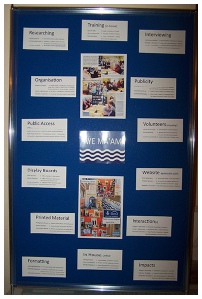 We have a public display at Parkstone Library and a range of project boards that travel with us to local events and presentations. 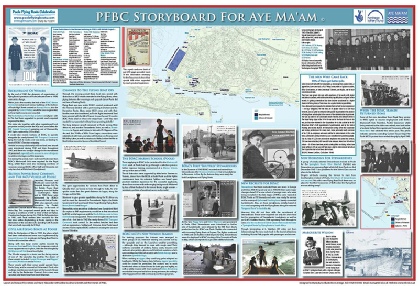 The new AYE MA’AM Storyboard (2015) - the fourth in a series of PFBC storyboards sited around Poole Harbour. Our quest now is to find some suitable sites for them along the shoreline.